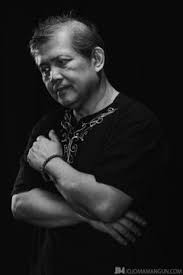 Josefino Chino Toledo (b. 1959) is a composer-­conductor. He is a full professor of music composition and theory at the University of the Philippines; executive director of Miriam College Center for Applied Music; and currently the music director of Metro-­Manila Concert Orchestra (MMCO) and GRUPO 20/21, a modular music ensemble.

Toledo is noted for premiering works of Filipino composers as well as other Asian composers and has conducted concerts in Japan, Indonesia, Australia, and China. According to Philippine art critic and National Artist Leonor Goquingco, “Toledo is one of the (Philippines’) finest and best conductors ever.” His own compositions are regularly performed in international festivals, concerts, music competitions and recitals in US, Canada, Lithuania, Brazil, Israel, Australia, New Zealand, Italy, France, Austria, Netherlands, Germany, Switzerland and several Asian countries.

Among his awards are the University of the Philippines Artist III (highest university artist rank) for 2009–2014, The 2014 Natatanging Guro (Outstanding Mentor) – UP Gawad Chancellor, The UP Centennial Professorial Grant, The Outstanding Young Men Award (TOYM, Arts), International Award for the Arts, Civitella Ranieri Fellowship Award in Italy, the ASCAP-­Raymund Hubbel Award in Composition, PMPC Star Award for Best Music, The Golden Screen Award for Best Music, Outstanding Distinguisged Alumin Award from Far Eastern University, and Chancellor Award/s for Outstanding Musical Works from the University of the Philippines.

Toledo is cited in the New Grove Dictionary of Music and Musicians (UK); 20th Century Composers of Asia (Japan); Komponisten der Gegenwart (Germany); Philippine Encyclopedia for the Arts; Who’s Who in International Music (England); and Who’s Who in Australasia and Far East (England,).

Toledo’s music has been described as “pure and powerful”, and has been cited for its fusion of contemporary western language and Southeast Asian aesthetics. Music critic Rosalinda Orosa described Toledo as “a composer-conductor of considerable worth” and “…an ingenious, remarkably original composer of singular creativity and imagination.” Toledo’s music is characterized by great energy and often bears a relationship to the traditional music of Southeast Asia.

Toledo’s works also include music for theater, films and revisions and editing of Philippine sarsuwelas.

The Strings of Unity Initiative is currently creating its database of all Filipino Rondalla groups locally and abroad. This will strengthen the dissemination of Rondalla related activities such as festivals, training and conferences in the near future.

We are encouraging all of you to send us an email with the following information:

Thank you very much. Looking forward to your responses.